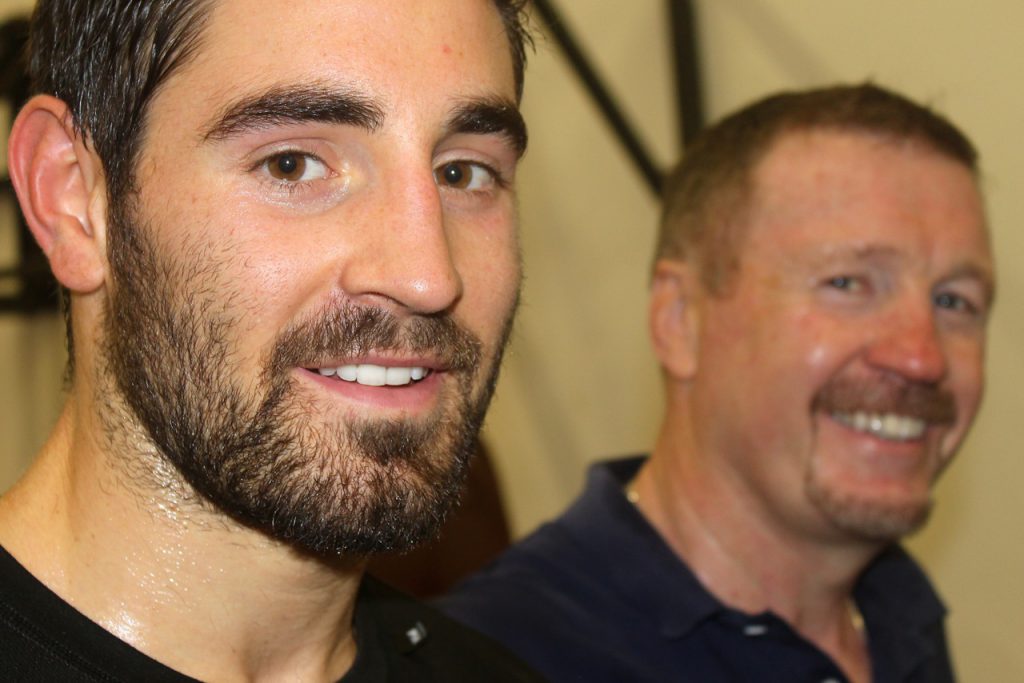 Just to the left of the back of beyond in a boxing gym called Target Fitness I offer my hand to Steve Collins. The former WBO middleweight and super-middleweight champion eyes me a little suspiciously before reluctantly extending his own. “Jey-sus, I thought you were going to kiss me!” he says in an unmistakable Irish brogue.

Collins has not long turned 50 and looks good on it, certainly better than I do. If you squint it is difficult to discern much of a difference between the man standing before you and the boxer who cleaned up the British end of the super-middleweight division in unequivocal fashion during the mid-1990s. “Not just yet,” I say, feeling in his fingers a little of the power that earned Collins double wins over rivals of the calibre of Nigel Benn and Chris Eubank.

Gloved up next to the former champion is a young fighter and occasional model named Frank Buglioni. Although Buglioni would be the first to admit that the Southern Area super-middleweight title he picked up this September is some way short of the prestige that he covets, in Steve Collins he sees a template that he hopes will put him in more esteemed company.

“I’ve always been a fan of Steve Collins and I’ve met him at various events in the boxing world,” Buglioni tells me as he prepares for the older man to put him through his paces. “You can’t get any better than what he’s achieved and how he achieved it.”

I perch on the ring apron and watch Buglioni aim punches at his new trainer. This is not the first time I have seen Buglioni do this. In March of this year I saw him exchange blows with an impressively muscled Ovil McKenzie in London’s Canning Town. On that occasion former boxer Mark Tibbs was the man mopping Buglioni’s brow and although at the time I kept it to myself, there was something troubling me about what I was seeing.

Buglioni was just a week away from the second defence of something called the WBO European super-middleweight champion. His opponent was a wily old coyote named Sergey Khomitsky and although hardly cannon-fodder, everyone was expecting Buglioni to beat the 40-year-old veteran handily. Nevertheless, I found it difficult to ignore the air of complacency that seemed to pervade what I saw in that gym. Although punches were thrown and received in great quantity by Buglioni, there was something subtly lacking in intensity. It was difficult to put your finger on it but it still came as a surprise when Buglioni was halted in six rounds.

“We knew it was the biggest step up in my career to date. We knew he was a very good opponent but knew that he falls apart after about six or seven rounds,” an eloquent, focused Buglioni remembers. “He’s 39 years old so I had the youth on him but I didn’t box to my strengths. I think I could have put the pressure on earlier, settled him down a little bit, made him wary rather than trying to lull him into a false sense of security and catch him with counters.

“You just know in their eyes. I hit him with a shot and his back leg gave way a little bit. And I went in and threw a few shots and he held. When I was hurt I didn’t have that experience. I didn’t hold. I didn’t tie him up. I tried to fight when my coordination and timing wasn’t there. And that’s what happened in the sixth round. He caught me with a good shot and I went with him a little bit. And then he caught me with exactly the same left hook round the side and on the chin again.”

“My trainer stopped the fight because he knew that fella could have finished me and done more damage,” Frank continues. “I’m not naive – I know he could have done that. I was in no position to continue at that time. And that’s probably why I’m so confident and I’ve come back so strong. Because I walked out of that ring. I wasn’t put on my arse.

“It didn’t hurt. Obviously my legs went, my coordination went and the ropes probably kept me up but I didn’t go down. In the corner of my eye I saw the referee and I thought, ‘don’t jump in! Don’t jump in!’. I was still thinking, although obviously I couldn’t defend myself.”

“I’m glad I lost,” reflects Buglioni on the defeat that prompted him to seek a new trainer. “When I look back and I’ve got the world title around my waist I’ll say that the loss put me back on the right track.

“Sometimes you have to be beat to realise that you need to rectify things and do them properly. That fight stopped me from just going through the motions. I’m a fighter now. I get on with my job. I’m there to hurt people now.”

The person he’s hurting today is Steve Collins. I watch as teacher and student navigate the boundaries of the ring. In one corner Collins ties Buglioni up and grunts encouragement as his protégé works at improving his infighting. In the centre of the ring Buglioni continually prods out his big jab and follows through with a heavy right that makes me wince. Always pressing, pressing, pressing with tangible urgency. Even though Collins is wearing a ridiculously oversized body protector he will sometimes stop the action and gratefully gulp in a mouthful of air: “That one fucking hurt!” he exclaims on more than one occasion.

It’s fascinating to watch:  A little bit of Brockton, Massachusetts transplanted to Cheshunt, Hertfordshire. A direct link to the habits that Collins absorbed in his early days with the Petronelli brothers, trainers of a certain Marvin Hagler. A level of intensity that Buglioni hopes will turn him from fringe contender to champion.

“Once I’d left Mark I rang Steve and said I needed advice,” Buglioni tells me later as he eats a salad prepared by himself. “I said I wanted to get away from London and all the pressure. I wanted to go down the same route that he did.

“He said: why don’t I fly out to Dublin and meet his brother, Paschal, and see what it’s like? The day after I spoke to him I was on a plane and that afternoon I was sparring with Gary O’Sullivan at the Celtic Warrior’s Gym. There are hungry, determined fighters there and they are all pushing each other. So when I came back I told Steve that I wanted to make it work.”

And Steve certainly likes to work. While Buglioni showers I find Collins sweating it out on an exercise bike. He talks about the Petronelli days. About how Hagler would never spar with him. “I understand now,” he says breathlessly. “You don’t want some young fighter trying to knock your head off. In those days I thought I could beat anybody.” He talks about those contests with Eubank, about how unbelievably strong the Brighton fighter was. About how hard Nigel Benn hit. He talks about Roy Jones Jr…

Collins is one of boxing’s more presentable survivors. Unlike so many he has managed to avoid the bankruptcy courts and lives in comfort in St. Albans. He owns a working farm with cows and sheep, plays polo and, in addition to Buglioni, finds time to oversee the nascent career of his cruiserweight son, Steve Collins Jr.. But one has only to Google the ex-fighter to find plenty of evidence of an ongoing desire to fight the faded Roy Jones Jr..

“He’s still got it,” says Buglioni. “Steve was a master technician and I know that chopping right hand he throws very well. It creates a lot of power. When we’re on the pads he shows his shots and throws them around the shoulders and you can still feel the power.”

Up close Buglioni does not look much like a boxer. At 25-years-of-age he’s picked up the occasional nick but he still has the film star good looks that can have rivals and commentators dismissing him as a Fancy Dan, a latter day Gary Stretch. One only has to spend a few moments with him, however, to understand that Buglioni is deadly serious about what he does.

“For the next fight I will stay in Dublin for six weeks,” he says. “I rent out a little one-bed apartment in the city centre. I don’t see the night-life. I’m in the gym twice a day. I do my own shopping and my own cooking. I don’t go out in the evening. I’m in bed by 9:30 p.m.”

The man responsible for robbing Buglioni of his night-life is one Andrew Robinson. The pair meet on the undercard of Fury-Chisora In November when Buglioni will attempt to regain the title he lost to Khomitsky. The unbeaten Robinson has the disconcerting nickname of ‘D’Animal’ but that does not seem to intimidate Buglioni. “Robinson will be the one going to bed early when we meet,” he says as we exit the gym just to the left of the back of beyond.