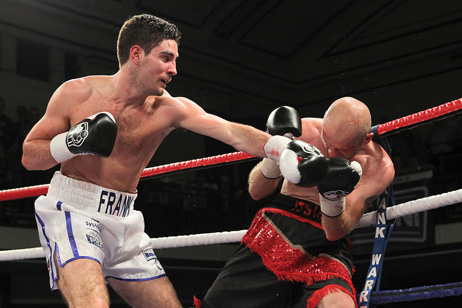 After blasting away another opponent in the 1st round, it was decided Jody Meikle the light heavyweight hard man would be brought in to test Buglioni’s stamina and resolve over 6 rounds. And that is what he did, with some added comical value for the crowd and a nasty cut and black eye to reiterate Buglioni’s punching power but also Meikles durability.

Walking out to a reception befitting a world champion, four-fight prospect Buglioni had the home crowd in his hands all the way to the opening stanza and beyond. A famed power puncher, Buglioni went to work occupying the centre of the ring, stalking Meikle and making his opponent uncomfortable.

For the majority of the second round, mobile Meikle managed to elude Buglioni’s biggest shots with constant ring movement around the outside. Buglioni largely walked with him, instead of cutting the ring off – a trait that highlights his relative inexperience at this stage in his career – however, the Anglo-Italian scored well with a flurry prior to the third minute of the round, battering Meikle with his back to the ropes. Much to the crowd’s delight, Buglioni finished the round with an Ali shuffle.

In the third round, Buglioni’s greater power began to take effect as he clubbed right hands into Meikle skull, forcing claret to begin pissing out of an eyebrow laceration that would require multiple stitching. Even as he lost rounds, Miekle showboated and played up to Buglioni’s 300 fans on the balcony as Frank attempted to catch him in the fourth. While Meikle landed with solitary right hands, it was Buglioni who landed the more telling blows – with greater regularity – including orthodox jabs, short-range shots tucked into the midsection, uppercuts from the inside and three straight right hands one after the other… bosh, bosh, bosh.

Despite obvious defensive insufficiencies in Buglioni’s approach – a common negative in come-forward aggressive fighters – Buglioni did show good upper body intuition as he ducked below Meikle’s shots in round five, as well as solid parrying as his gloves diverted Meikle’s lighter shots.

This was noted by Tibbs post-fight, who said: “[Buglioni] boxed fantastically. His defence work was fantastic and when you watch the replay you’ll see what I’m saying.
“I want to see him go up a gear, faster promotions, that will come. It’s hard to pin [Meikle] down, he knows what I mean. I’m over the moon and elated by his performance tonight. Beautiful.”

In the concluding brace of rounds, eyebrows were raised over Meikle’s punch resistance as his titanium skull appeared undented despite a barrage from Buglioni as the crowd favourite rushed Meikle, clubbed him with heavy shots and even rocked his head back with worrying ease.

“I thought that was a very accomplished performance,” mused Warren. “I want to give a massive, massive shout out to Frank’s fans. They make a huge noise. Long may it continue.”

“We worked on a lot of things in the gym, it’s a long slow process and I’m in it for the long haul,” Buglioni (5-0-0, 3ko) said to Box Nation following his points victory. “It’s a brilliant experience to know you can do six rounds at a good pace, keep your head and not get caught up with the crowd. Mark and Jimmy have kept me fit. I don’t think I took many good shots, obviously I took a couple, this is boxing. He’s very tough, with a nasty cut, to go the distance.”