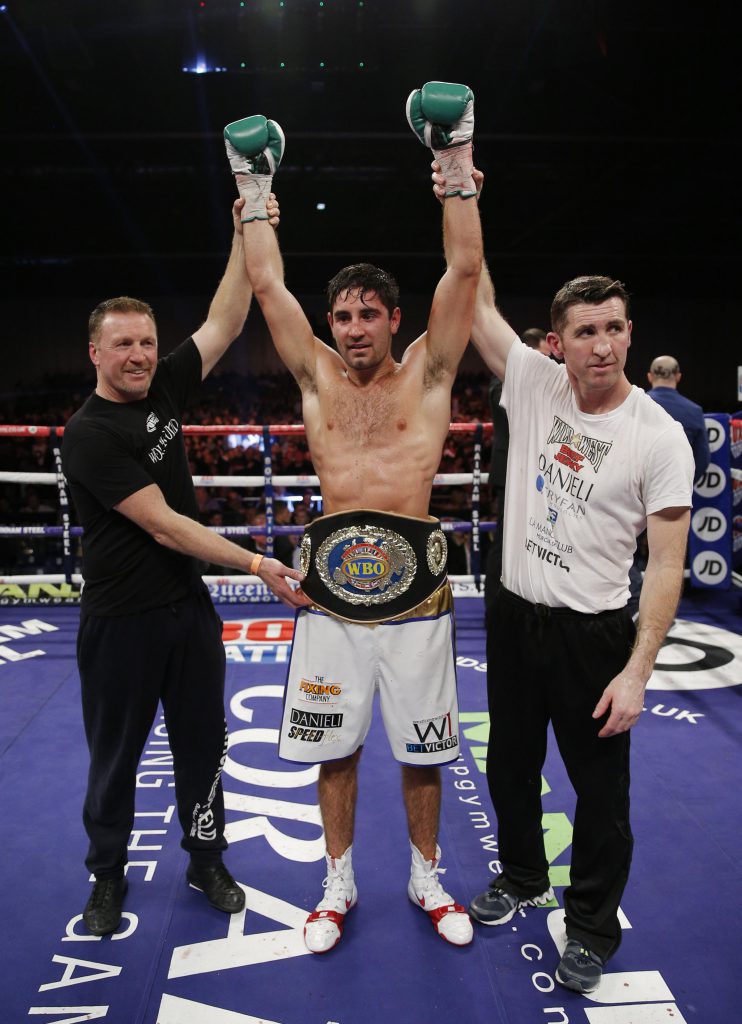 Undefeated in 13 and never knocked down, this was the gauntlet laid out by Andrew Robinson on 29th November at the Excel Arena, London. It was a fight that Buglioni had trained hard for and one that 1,000 Team Buglioni fans had flocked to see – Frank looking to stake his claim for the WBO European Super Middleweight title for a second time.

Before the previous fight had come to fruition the chants of the 1,000 strong Team Buglioni masses, along with a good percentage of the other fight fans, rang out across the 20,000 seater arena. Needless to say that given his reputation, it was a fight that promised to deliver explosive boxing, and it didn’t disappoint.

Frank opened the first round (perhaps too eager) empowered by his deafening crowd, he walked into Robinson’s range and was punished by two forceful right hands. Undeterred Buglioni continued to press the action and traded shots with Robinson. A round that could be scored 10-10. The second started with punishing right hands over the top of Robinson’s guard, combined with left hooks to the body – it was obvious that Robinson could feel the power of Buglioni at his best.

There were a few exchanges, with Frank displaying some educated defensive work to compliment his attacking form. Buglioni took the next three rounds, getting the better of Robinson when they traded and certainly landing the more telling shots.

To credit the boxer from Wolverhampton, he had success with the right hand but Buglioni’s granite chin strode through blows and marched on to deliver his own shots which were quickly mounting up. In between rounds you could see the mental work that Steve and Packy Collins were imparting on Frank taking effect, an ever-patient and positive influence in the corner was showing in the ring as Frank took his time to dismantle his opponent.

As a result of the hard work and patience Robinson was slowing and Frank seemed to be getting in to his groove; the jab was accurate and served as a range finder for the left hook and sharp right. Upper cuts were landing frequently for Buglioni now, as Robinson decided to try his luck on the inside, unfortunately for him  he found no more shelter there than he did from range. A stiff fast puncher, it was clear that Robinson had skill and possessed the right tools to lay on a stern challenge but as the rounds progressed and the body shots mounted, Frank blazed a fiercely accurate and hurting left hook on to his chin and he went over. Beating the count, as his record would suggest he would, Robinson found his feet just before the bell rang for the end of the 7th.

At the 8th Buglioni sensed his man was hurt, he chased the stoppage victory. More heavily decisive shots were imparted and for all watching it looked as though the referee would call time on the visitors night – only to be interrupted by the sound of the bell for the end of the round. Robinson, out on his feet, collapsed into his stool and gathered his composure.

The ninth round saw Buglioni boxing with education and poise, looking to make each shot count. Credit should go to Robinson for surviving the 8th and coming out reinvigorated in the 9th, getting off his own shots but unfortunately it was too late and his attempts to land were again met with some stubborn defensive work. The final round was all or nothing for Robinson and he showed strong determination, soaking up more of the Buglioni onslaught. His efforts to defend himself saw a clash of heads which opened up a small cut above Franks left eye, but this did little to deter the Londoner from seeing out the fight and signing off with a hard fought, yet very well deserved unanimous win.