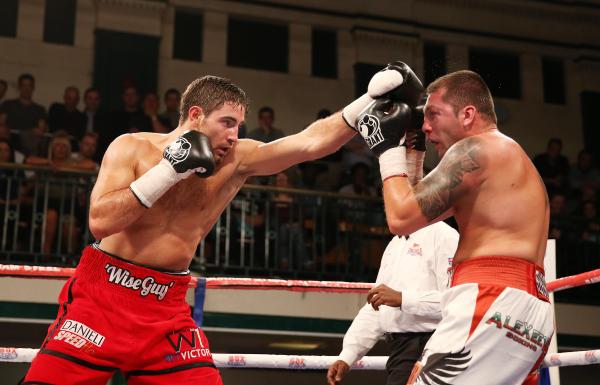 Buglioni’s 15th fight would be against the no.1 Bulgarian Middleweight, Alexeev Ribchev. Only twice been stopped in a 30 fight career. We would witness just how tough this Bulgarian would prove to be.

Both fighters weighed twelve stone, one and one half pounds on the scales at the day before official weigh in. But it was clear to say Buglioni had come to the scales and contest in superior shape. A testament to his new trainers; world renowned Boxing brothers; Steve & Paschal Collins. (Please see blog article; ‘Wise Guy joins Celtic Warriors’ for in depth report on Buglioni’s change of trainers)

Round 1, Buglioni starts the aggressor and pushes Ribchev back with spiteful jabs and straight rights. Finding Ribchev on the ropes, Buglioni began to set up hooks and short uppercuts. A flurry of shots including some punishing right hands sees Buglioni shake Ribchev and take the round comfortably.

The second round follows suit, Buglioni dominating from the centre, pushing Ribchev back with powerful straights. Buglioni pushing Ribchev close to the ropes lands with vicious short uppercuts and hooks on the inside, not power punches but hurtful skimming shots which are marking Ribchevs eyes and cheeks. Another Buglioni round.

Going into the third Ribchev needs to fight back to avoid being stopped by the ref. he throws some lunging combinations which Buglioni blocks with an improved guard and high left hand. Ribchev is met with counter right hands for his troubles and is shaken. Buglioni sensing his man hurt, continues to unload combinations and rapid fire punches. Ribchev uses every ounce of experience to hold, tie up and spoil til the end of the round. His corner have work to do bringing down his now swollen eyes.

The fourth round sees Buglioni outbox Ribchev and fire shots at distance, catching a leaping left hook from Ribchev, Buglioni is not troubled but responds positively with some hard shots of his own. Four rounds up Buglioni returns to a happy corner.

Instructed to keep doing what he’s doing and start switching to the body, Buglioni is up off his stool and into the fifth round. Buglioni finds openings off his jab, dropping to the body after side stepping. A new technique from camp Collins in Dublin no doubt. Buglioni piles on the pressure, unanswered combinations sees Jeff Hinds the referee take a closer look at the action and is ready to jump in and save Ribchev on more than one occasion. The crowd roar Buglioni on as the finish seems imminent. Ribchev however survives another round, the Bulgarian shows a toughness beyond belief.

The sixth round commences with Buglioni finishing where he left off, swinging and missing Ribchev is caught by 3 stinging right hands as Buglioni counters and side steps one after the other. The final right opens up a nasty gash to the right eye of Ribchev, with blood soaked vision, Buglioni sees Ribchev’s vulnerability and unleashes even more punches. The referee and doctor deem Ribchev unable to continue and the contest is called to halt halfway through the 6th round. Another TKO victory in favour of Buglioni. Team Collins & The Wiseguy will be pleased with a solid opening performance to their newly found partnership and the improvements will be built on for the next outing on November 29th. Watch this space.