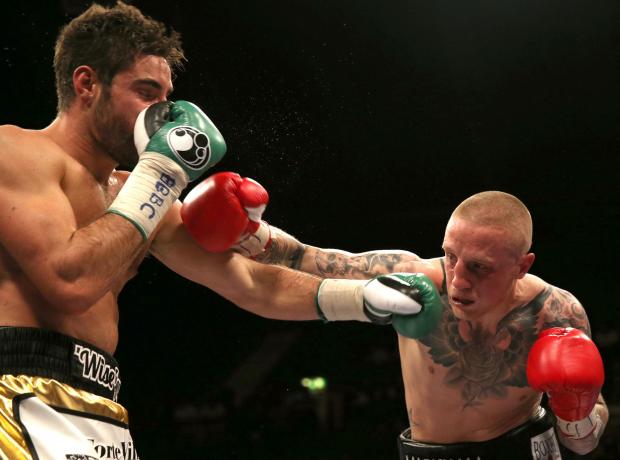 This fight had been long awaited, by both Buglioni & Markham. An eagerly anticipated match up, where the rivalry stretched as far back as when they fought in the amateur days…

As amateur boxers, Buglioni had beaten Markham in the under 20 bout Senior boxing competition, in fact it was the North East Division finals. A year later they boxed again in the same competition, this time Markham came out the winner. However Markham pulled out of the London final after sustaining an injury in the Buglioni fight, Buglioni went onto face John Ryder in what was to be fight of the night and brought the house down at York Hall (this would be the first of many times Buglioni would fight at York Hall, and bring the house down!)

Buglioni & Markham had a grudge against one another, nothing personal (both stating the to the press in the pre fight build up) and it is clear there is a mutual respect when talking of one another. Much like the majority of rivalries in boxing, it tends to be from a professional stand point, each fighter wants to prove he is the better man.

First round, Buglioni & Markham keep their guards tight and try to find openings with hooks and uppercuts, trading jabs before closing the distance and working on the inside, two stand out left hooks to the body from Buglioni. Even round.

Second and third round much of the same, Buglioni lands the cleaner punches and makes Markham miss whilst moving on the back foot. Fourth round sees Buglioni catch Markham on the way in frequently but lands a telling combination in the closing stansa of the fourth.

Fifth round, Buglioni keeps Markham at range for the first two minutes of the round, Markham grits his teeth and lands some eye catching shots in the final minute, but Buglioni answers back. Four rounds to one on Enzo Macranelli & John Rawlings score cards.

Sixth round Markham stays close and exerts good pressure on Buglioni, Buglioni lands with a crunching body punch which clearly hurts Markham, but credit to the Harold Hill man biting on his gumshield and soaking up the punch.

Markahm exerts his will on Buglioni in the 7th as Buglioni begins to look a little drained and ragged. But Buglioni moves well and comes on strong towards the end of the round.

Round eight sees both men go to war with some eye catching combinations being thrown and landed.

Buglioni dominates round nine and really pulls away on the score cards. The Boxnation team stating; Markham needs a knockout to take the victory. Both fighters give there all in the closing round and put on a real performance, their bout would later be nominated for domestic fight of the year.