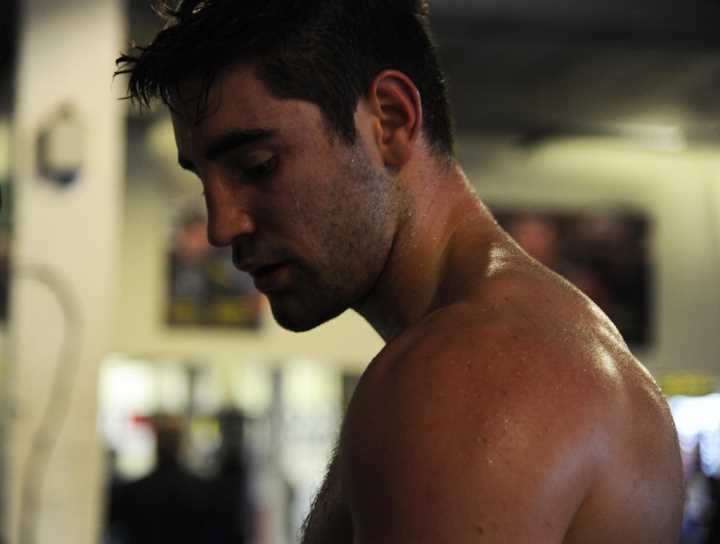 Long before anyone steps near a ring, before any bell sounds, any punches are thrown or boots are tied – the preparation begins.

The Wise Guy is now 5 weeks away from his ninth outing and last scheduled eight round contest. Whilst other fighters in the division seem in a rush to get in to double figures, the strategy of this stable is one of longevity and success over time; no one’s in a rush and that denotes a quiet confidence, not only in their ability as trainers, but in their fighter too. There’s not an expiration date on talent.

The scheduled date for this next fight is July 20th – the Venue is the evocative Wembley Arena which is already home to two of Buglioni’s most emphatic wins. As before the opponent will remain unknown until closer the time as experience tells that opponents will drop out frequently in the lead up to a fight that is not being contested for a title (not something Buglioni will have to worry about for long!).

Frank is now approximately three weeks into his eight week training camp. With exclusive access to the camp we know that the watchful Mark Tibbs is constantly pushing him through thousands of resistance repetitions, ensuring a solid strength foundation. Combined with a dedicated and tough road routine Frank’s stamina is equally on par with his impressive strength and formidable punching power.

The precision, frequency and duration of training sessions, as well as the intensity stay a secret to those more closely involved with Team Tibbs. The Tibbs’ father-son partnership remains as steadfast and fluid as ever. With years of experience, both as fighter and trainer, the east-end pair have earned respect amongst the boxing fraternity. It’s a true as ever to say that to face a boxer prepared by that corner can place doubt into the mind of even the sturdiest of opponents. You know he’s going to be iron tough and you know he’s going to be supremely fit… What you don’t, or will ever know is the in-depth knowledge and guidance imparted on the fighter and tactics that have taken years to accumulate and even longer to perfect.

Frank recognises this as the best physical and mental shape of his life and when asked about how he is feeling ahead of his ninth professional fight he had this to say: “I have been working closely with the nutritionists at ION (Institute of Optimum Nutrition) for the last two fights and have never felt so strong at the weight. I have been able to put on and maintain extra muscle mass without compromising the 12st limit at which I fight at. This wouldn’t have been possible were it not for the use of a diet plan that works perfectly to my training schedule.”

Not surprisingly, this fight comes with added pressure as announcements last week state Frank will fight for a southern area title in September 21st on the same show as the highly anticipated domestic grudge match between Billy Joe Saunders & John Ryder. Frank, no stranger to pressure, added: ‘The fight in front of you is always the most important, so the only date in my mind is July 20th nothing in training will be neglected and no one overlooked, I’ll be looking to show improvements once again and put on a great performance in front of the loyal support.’

Every fight we’ve been given another sign of what this young fighter is capable of and come the 20th July I’m sure we’ll get to see yet another gear. The wise guy seems to have his mind and body in prime condition and I for one will be looking forward to seeing the ever improving Buglioni in action.

Frank headlines the undercard on July 20th, with Dereck Chisora Vs Malic Scott, Billy Joe Saunders Vs Gary O’sullivan, Carl Frampton & Paul Butler headlining what is set to be another action packed show from Frank Warren. Live and Exclusive on Boxnation.