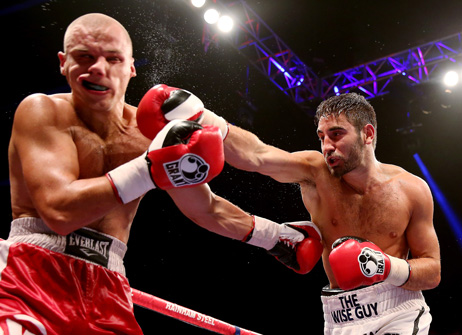 Every champion, every winning team and individual who excels in their field knows that sometimes, you’ve got to win ugly. The victory is the purpose and the drive, the performance is the journey to the goal. Given this, last nights journey was ultimately pleasing, but we might expect – not how many thought it would go. Even the programme for the evening suggested that the judges ‘wouldn’t be needed for this one’. Lets not be fooled in to thinking that this could be perceived as a negative though; the victory was fluid and emphatic with glimpses of world class boxing on show right from the opening bell.

Crunching body shots, solid hooks and silky combinations saw Buglioni glide through eight rounds with Lithuanian Super-Middleweight Kirill Psonko at Wembley Arena. Heading the undercard of what was an explosive night of boxing, Frank Warrens stacked card; Behind Enemy Lines, Buglioni didn’t disappoint his fans and extended his unbeaten run to an impressive 9-0-0.

After eight rounds the Wise Guy’s fitness wasn’t the only thing on show, determination and resilience were also key in this stylish victory. While holding the centre of the ring, Buglioni picked shots and tried to get the defensive opponent to drop his hands. Five and six shot combinations landing with ferocity and accuracy rocked Psonko as he retreated to the ropes on multiple occasions; and although it would be fair to say that Buglioni had this fight won from the first round there was still a lot of work to do.

A more measured performance than was typical of the heavy handed Londoner, the earlier rounds saw Buglioni dominate and land the heavy shots we’re used to seeing when watching the wise guy unload his arsenal. As the rounds went on, Psonko refused to drop his hands and so with that the tactics changed and we saw more of Buglioni’s tactical punching come to light; and a rare opportunity to venture beyond six rounds and showcase some very impressive head movement and ring craft that oozed of hard work and dedicated training behind the scenes. Buglioni was caught with too many right hands and the Londoner admits this himself. At times Buglioni neglected his defence in an attempt to unload his own arsenal of shots, getting caught in the process. Lapses of concentration and frustration also seemed to plague Buglioni from rounds 5-7, a stern talking to from Mark Tibbs at the end of round 7 however, allowed Buglioni to finish strongly and perhaps see the goal clearer; hit without being hit. Buglioni should take confidence from this performance and the criticisms that follow will only serve to toughen his skin and prepare him mentally for the bigger fights.

It’s no doubt that the wise guy would have liked to ship this boxer out in the early rounds as is becoming customary at Buglioni fights. But without a doubt getting eight rounds under his belt will most likely serve him better in the long run, and help preparations for the next test; ten round contests and title contentions, not all opponents can be stopped, this will become more evident as Buglioni is stepped up.

Mark Tibbs and the TKO team will now look to optimise this learning and take the whirlwind of positives into the already announced September showdown at the infamous Copper Box in Stratford.
Report by Mr Matthew Collett – @MattCollett