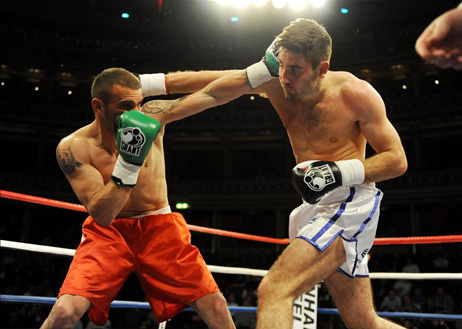 Buglioni comes into the fight on the back of a four round points victory and is looking to stretch himself over a six round scheduled contest this time against Daniel Borisov. Buglioni’s entrance is in harmony to his five hundred strong support singing his chosen ring walk music; ‘Seven Nation Army’ by The White Stripes.

‘Team Buglioni’ seem a well put together outfit, an army of loyal support, a slick publicity machine and a decent fighter (from what we have seen so far) at the helm. Managed and promoted by arguably the best and most well known; Frank Warren and trained by the legendary East London father, son tandem in Mark & Jimmy Tibbs. The ingredients for a rather tasty recipe, time will tell how tasty. I Digress. But you can forgive me for my ramblings as there is not much to talk about for this fight, it is a night more so about the figures that surround Buglioni than the man himself…

Buglioni comes out strong and troubles his man with the first one, two, left hook he throws. Borisov immediately looks to clinch and hang on. To no avail I might add, a solid right hand on the inside sends Borisov to the canvas. Climbing to his feet but obviously unsteady Buglioni charges his man down and sends him to the canvas for a second time. Buglioni applies a 3rd and final barrage that puts Borisov down once more, forcing Referee; Mr Richie Davis to stop the fight. It was about a minute thirty into the opening round.

Taking no credit away from Buglioni, as the man clearly has power and timing in his shots. But what was more impressive that night was the Team Buglioni celebration. A five hundred strong crowd, a mixture of men, women and children all turning their backs and jumping up and down in unison whilst echoing the seven nation army tune. Perhaps the marvellous acoustic nature of the Royal Albert Hall helped send the shivers down my spine, but I could not help but get excited and caught up in the magic of the crowd. And I’m excited for another reason, I witnessed a first; A spectacle that has never really been seen in boxing before, especially not this sort of following for a 3 fight novice. And I’m excited about the future for Buglioni & his following. I believe Buglioni has what it takes to reach the upper echelons of British boxing and beyond and I look on with great interest in what could become Hatton-esque.