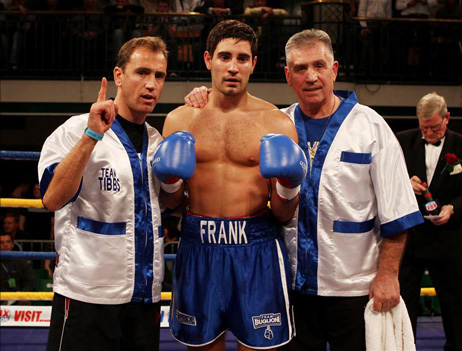 Frank Buglioni’s second outing against former southern area champion; Paul Morby came but only 13 days after his debut. An opportunity Buglioni relished. The chance to continue his winning streak and satisfy the army of fans he brought to his debut at Wembley.

Buglioni was to fight at the historic York Hall, a venue he was familiar with in his amateur days but a venue which transformed into something almost gladiatorial when the professionals competed there. It would be an entirely different feel and atmosphere this time round.

Buglioni & Morby both hit the scales around the 12st (super-middleweight) mark. It would be an interesting match up, attracting a lot of attention; the puncher in Buglioni Vs the slick experience of Morby.

Buglioni started very fast, coming out with sharp stinging jabs, pushing Morby onto the back foot from the get-go. Buglioni flicked out range finding jabs against the awkward southpaw and closed the ring down, backing Morby into the corner Buglioni let fly with head and body combinations, forcing Morby to clinch.

Buglioni obviously familiar with southpaws in his amateur days and also spending a lot of time sparring the top class southpaw in Billy Joe Saunders seemed at ease forcing Morby onto his right hand and keeping his front foot on the outside. He continued to apply educated pressure with the jab and straight right hands. Morby however found success with his own back hand; the straight left found Buglioni flush, but did little to faze him.

Just past the mid-way stage of the first round, Buglioni landed a well timed 5 shot combination, the final shots; a left uppercut right hand and left hook land around Morby’s head and force him to the canvas.

Morby bravely climbs to his feet and continues. Buglioni sensing his man in trouble hunts him down, throwing vicious right hand left hooks, a left hook misses slightly and a thunderous right hand lands flush on Morby’s chin again putting him down.