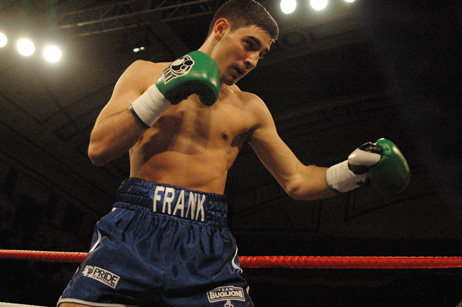 For Frank Buglioni’s first professional contest he was tested with a stern opponent; the dangerous and wild Sabie Monteith. The never been stopped aggressive brawler was to be Buglioni’s welcome into the pro ranks. Buglioni gave away weight, age and experience (in a professional ring).

After the opening bell it looked as though the match up was going to be a lot harder than a typical prospect debut. Monteith had certainly come to win and ruffle some feathers along the way. He charged Buglioni down with straight one, twos and powerful swinging hooks. Buglioni slightly flustered tucked up and rode the early barrage. Monteith, the naturally bigger man looked to rough Buglioni up on the inside. The newcomer stayed composed and landed some short right hand left hook counters whilst in close.

Monteith quite clearly felt the venom in the shots and the obvious power of Buglioni, forcing him to change tactics and retreat onto the back foot. Buglioni chased him down with jabs and long right hands to the body. Guilty of following his man round rather than cutting off the ring, Monteith was able to skip out of the corners and off the ropes. Nevertheless, Buglioni picked up the pace and found his man cornered, backing him onto the ropes, Buglioni moved from head to body peppering his opponent with crisp shots.

Once again Monteith evaded the corner and moved around the outside of the ring, not for long however. Buglioni cut the ring off and pinned Monteith against the ropes. A sharp straight jab, right hand onto the gloves of Monteith forced a retaliation and thus created the visible opening. Buglioni connected with a sweeping left hook to the side of Monteith’s jaw, leaning away to dodge Monteith’s own right hand, then swaying back in with a chopping right to send Monteith crashing to the canvas.

After failing to gain his senses at an 8 count, referee Mr Robert Williams calls a halt to the contest and hands Buglioni his first TKO and win in the pro ranks.
By Mr Matthew Collett – @MattCollett