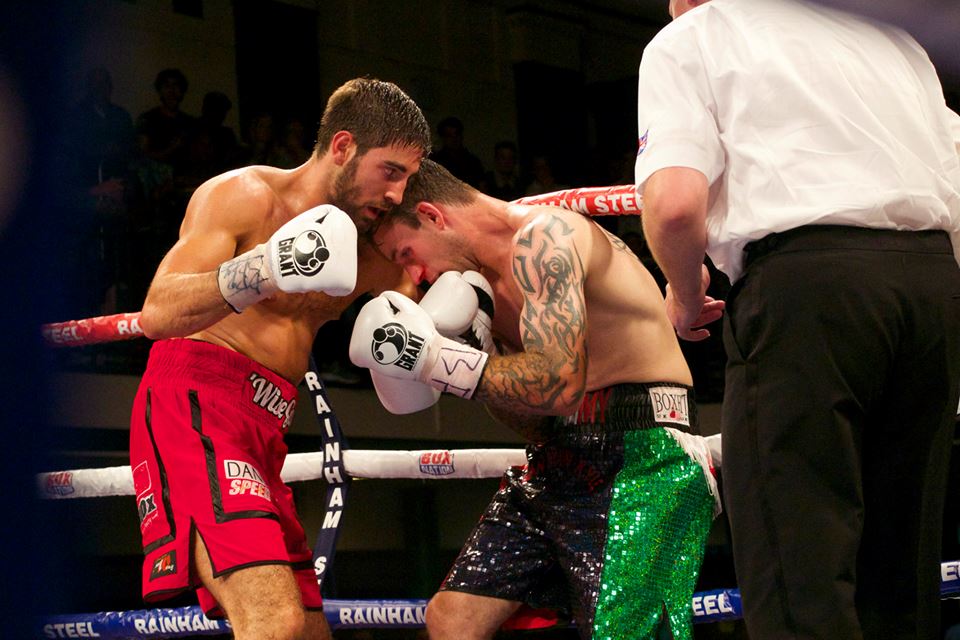 In Buglioni’s comeback fight he was to be up against former southern area champion; Sam Couzens. A seasoned and hardened pro. Couzens strengths were his durability, grit, determination and aggressive but somewhat unorthodox come forward style. The bout was to be for the vacant Southern Area title, headlining Frank Warrens show at the iconic York Hall. July 16th 2014.

Buglioni’s mental attitude had changed considerably since suffering his first loss to the world level Khomitsky. He had developed the much needed spite along with that tunnel vision to his trade considered vital when getting to the top of any sport, none more so than boxing. Always dedicated, it was well documented that Buglioni had stepped his commitment up a notch, from dedicated to almost a monk-like existence during training camp. The rumours of this increased determination were confirmed at the weigh-in when Buglioni presented himself in the shape of his life with an increase in muscle definition and lower body fat.

During his interview at the weigh-in Buglioni seemed cold and intent on doing damage to his opponent, predicting a KO victory inside 2 rounds. Sam Couzens it seemed, took umbrage to the aforementioned claim and showed the grit he was famous for, but there was only so much he could take.

In the opening round, Buglioni came out landing stiff, hard jabs to the head of Couzens who tried in vain to block the intrusive lefts. Couzens fired back with some jabs of his own, only to be deflected by a Buglioni parry and counter 1,2 combination. Buglioni piled on the pressure, stalking his man around the ring, an exciting trade off between the fighters took place in the Couzens corner with Buglioni slipping and rolling and coming back with left hook, right hands. Buglioni spinning off the ropes pushed Couzens back once more. A slicing right uppercut to the body took Couzens by surprise and Buglioni closed in, a left hook to body and head sent Couzens to the deck. Up at 8 Couzens looked hurt, Buglioni closed in for the kill but before he could land the killer blow, the belt ended for round 1.

Round 2 and 3 saw much of the same, Buglioni throwing combinations and stalking his opponent around the ring, landing with some crunching body shots and well timed uppercuts. Couzens nose began to pour blood and the swelling and bruising around both eyes was becoming evident. The fight was oozing from Couzens, his power and sharpness was fading fast. However Couzens showed elements of success landing the right hand to Buglioni’s temple on two occasions and a toughness that any fighter would be proud to have.

The 4th round, Buglioni started the round slightly slower than the opening 3 and opted to jab and move more. Perhaps a rest bite before mounting a final charge to finish the business. Couzens sensing the pace slow decided to mount an attack, walking onto a well timed right hand counter of Buglioni. Buglioni with his back to the ropes, felt the shot land and followed up with a vicious combination, landing a long left hook to the chin of Couzens, who reeled back into the ropes on the adjacent side. Buglioni followed him and let the shots fly, firing with both hands, hooks, uppercuts and straights to the head of Couzens. Me Bob Williams the referee had no option but to rescue Couzens and call the contest to a halt.

The wise guy was back on track, picking up his 10th Knockout & 13th win along with the Super Middleweight Southern Area Title. #TeamBuglioni who had been vocal throughout erupted in celebration! Special mention & thanks to West 1 Construction, Pride Scaffolding, BetVictor, SpeedFlex, Danieli, Herts Heritage & Tryfan Technologies for their generous and loyal support.