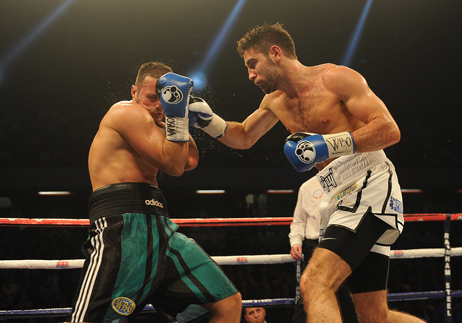 For Buglioni’s 11th fight it would be a stern test against a fighter with a 12 & 1 record, his single defeat a close split decision whilst battling for an international title. It would prove to be a tough test but a much needed learning fight to continue Buglioni’s progress and dominance through the 168lb ranks.

Buglioni & Horvath start tentatively, feeling each other out with jabs, double jabs and the occasional jumping left hook from Horvath. Comfortably controlling the pace from the centre of the ring Buglioni and Mark Tibbs will be happy with that start.

Continuing to control the centre of the ring, Buglioni makes Horvath work in spurts and uses much improved head movement and quick blocks to deflect and slip Horvath’s punches. In return Buglioni flicks out sharp jabs to rock back the head of Horvath.

As the rounds continue Buglioni begins to pick up the pace, by the 5th round blood is flowing from the nose of Horvath, the crisp jabs beginning to cause damage. Horvath being forced to step up the pace pushes him to throw some combinations which Buglioni evades with head movement.

Moving into the 6th round Horvath has elements of success by countering a few of Buglioni’s slow single jabs with short, sharp right hand left hook combinations. The closest round of the fight, but a good finish with some solid left right shot selection secures another for Buglioni.

Another steady 7th round with both fighters having flashes of success, Buglioni seems content keeping Horvath at the end of the jab, evading Horvath’s bursts and coming back with the occasional eye catching flurry. A speedy combination just before the bell, looks to have an effect on Horvath.

The bell for the 8th round rings and so starts the most memorable of the fight. With a strong finish at the end of last round, Buglioni begins with more intensity, double jabbing and stepping in with right hands. Forcing Horvath to circle round the ropes Buglioni lands with a 1,2 combination upstairs and a slicing left hook to the body as his opponent tries to move away. Horvath falls to the canvas wincing in pain. Up at the count of 8, Buglioni senses his man in trouble and lands another crunching left hook to the body, sealing victory and thus winning the WBO European Super Middleweight title with an 8th round KO.

The 600 strong Buglioni army are out in full force vocalising their delight to the tune of Seven nation army; Buglioni’s entrance music. A good night all round at the Copper Box…